If I had to sum up the coast of Ireland in only a few words, I’d use rugged, raw, and absolutely stunning. The western Irish coast is the first land mass hit by the Atlantic, creating some of the highest drop offs in Europe. This means the best hiking in Ireland is along some of the most stunning and impressive coastal cliffs in Europe.

Irish weather is notoriously bad and unpredictable. We must have picked a four-leaf clover on our way to Dublin, because we enjoyed sunny skies and 22C weather in December. Just a few days later, by the time we reached the Cliffs of Moher on the western side, I thought we might get blown away the minute we stepped out of the car. We lucked out on our next trip in March where surfers and boogey boarders were already taking the plunge on the Dingle Peninsula.

Whether you luck out with exceptional weather or not, it’s worth braving the wind and rain for the views from our picks as the 9 best hikes in Ireland. After all, there’s some truth to the saying, “there’s no such thing as bad weather, only unsuitable clothing.” (Alfred Wainwright). And on that note, be sure you wear warm layers, a waterproof jacket, and sturdy, waterproof shoes when hiking in Ireland.

This coastal cliff walk should make any list of the best hikes in Ireland as it passes by one of Ireland’s most well-known natural wonders, the Cliffs of Moher. This coastal path links the villages of Doolin and Liscannor with the cliffs marking the midpoint of the trail. If you’re interested in learning more about the area on your trek, try local farmer Pat Sweeney’s guided walk that starts at 10am everyday from O’Connor’s pub in Doolin.

Length: 18 km. One way takes approximately 4.5 hours. For a shorter alternative, start in Doolin and turn around once you reach the Cliffs of Moher. This roundtrip takes about 2.5 hours. The seafood chowder at O’Connor’s pub in Doolin is a warm and hearty finish to a long walk.

Difficulty: There is no seaward barrier on most of this trail, so be careful not to lose your footing. There are some steep ups and downs, so be prepared for a decent hike.

Starting in Ballycotton village, this coastal walk passes through miles of green farmland before ending at Ballyandreen beach. The path is lined with Gorse bushes, covered in bright yellow wildflowers and is known for its rich wildlife.

Difficulty: This is an easy, well-worn and fairly flat walking path. There are a number of stiles along the way to prevent cows from wandering off the farm, but that means prams and bikes can’t get through either.

One of the longest coastal walks of Ireland, The Dingle Way follows the coast along the entire Dingle Peninsula, from Dingle town to Tralee. With 180 km of trail, the walk passes through quaint villages and along stunning coastline. If you’re not planning to do an 8 day trek, plan you walk around a highlight, like Slea Head, Slieve Mish Mountains or the long sandy beaches on the Maharees.

Length: The entire path from Dingle to Tralee is 180 kilometers and about 8+ days.

Difficulty: Most of the coastal portion is easy to moderate, but becomes much more advanced as you approach Brandon Mountain.

The Burren looks otherworldly, with its massive expanse of limestone terraces reminiscent of the surface of the moon and completely opposite of what I’d imagined from the Emerald Isle. From Black Head to Doolin, you’ll trek over limestone pavement, grass, sand dunes and beaches. You can discover most of Ireland’s species of flowers here, including rare Arctic Alpine plants.

Length: The entire Burren Way is 114k which takes approximately 5 days. For a shorter alternative, plan your walk around a highlight, like Fanore beach or the views from the top of Mullaghmore.

Difficulty: Most of the route is well-mark along cattle droving roads and forestry tracks. There are some steep parts, depending on the part of the path you walk.

Don’t think you have to miss out on the spectacular views from a coastal walk if you don’t have time to stray far from Dublin. Using the DART, it takes about an hour to get to the start of the trail in Bray Head. The coastal path ends in the  harbor in Greystones, where you can easily hop on the DART back to the start or go directly to Dublin. This path was originally made to move workers and materials during the construction of the railway.

Length: 7km and about 2 hours. 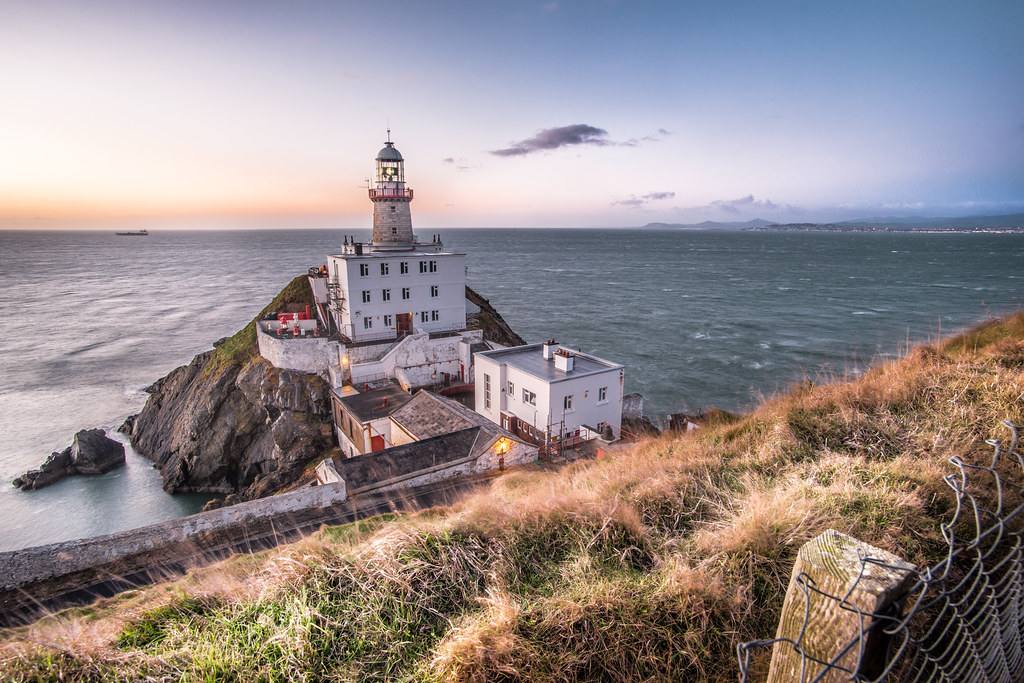 Also near Dublin, head 30 minutes north on the DART to find the start of the trail right outside the train station in Howth Village. Enjoy the beautiful Irish landscapes with spectacular views of Lambay Island, Ireland’s Eye and the Baily Lighthouse.

Length: This loop walk is 6km and approximately 2 hours. To extend your journey, try the Black Linn Loop (8km) or the Bog of Frogs Loop (12km). All trails start at the same spot, but are clearly marked where they split off.

Difficulty: These paths are fairly flat and easy.

If you’re going cliff walking for the views (which, who isn’t?!), there’s no shortage of breathtaking scenery to enjoy along this coastal path. Start off by the Pollock Holes (deep rock pools teeming with swimmers in the summer), then shortly pass the Puffing Hole, a natural blow hole. On a clear day, look out to the Aaron Islands to the north, Loop Head to the west, and Kerry to the south.

Length: 8km and about 2 hours to complete the loop. To cut the trip in half, turn left shortly after Intrinsic Bay and head back to town.

Difficulty: Moderate with a few steep inclines, but there are handrails to help. On most of the path, there are no seaward fences.

One Man’s Pass follows the edge of Ireland’s second highest sea cliffs, Slieve League. Though not as well-known, these cliffs are over twice as tall as the Cliffs of Moher and just as stunning.

The coastal walks along the narrow Sheep’s Head peninsula feature some of the most wild and unspoiled scenery in Ireland. If you complete the entire 200 km loop, you’ll pass through a grassy fields, charming country roads, small patches of woodland, and heathery moorland.

Length: The full loop is 200 km, but there are many smaller loops you can complete in a day. See a list of loops here.

Difficulty: With such a wide-ranging variety of landscapes on this route, the trail can range from easy to hard.

Hi, I'm Kelly, one of the three travelers behind No Man Before. I grew up in Arizona, but I've called California home for the last 10 years (minus one year in Cambridge, England). I love exploring the outdoors, photography, diving deeper beyond the popular tourist stops, and sharing all the practical tips from our travels here on this blog.

This site uses Akismet to reduce spam. Learn how your comment data is processed.

Hello, and thanks for stopping by. We're three adventurous travelers exploring the globe one trip at a time. We're sharing our best travel guides and tips here. Read More...

What’s one place you’ve visited before it got

Had a laidback camping weekend where it was all ab

Still can’t get over the magic that is Montara i

Did it feel like everyone else went to Europe this

We've been hiking and traveling to spots that are