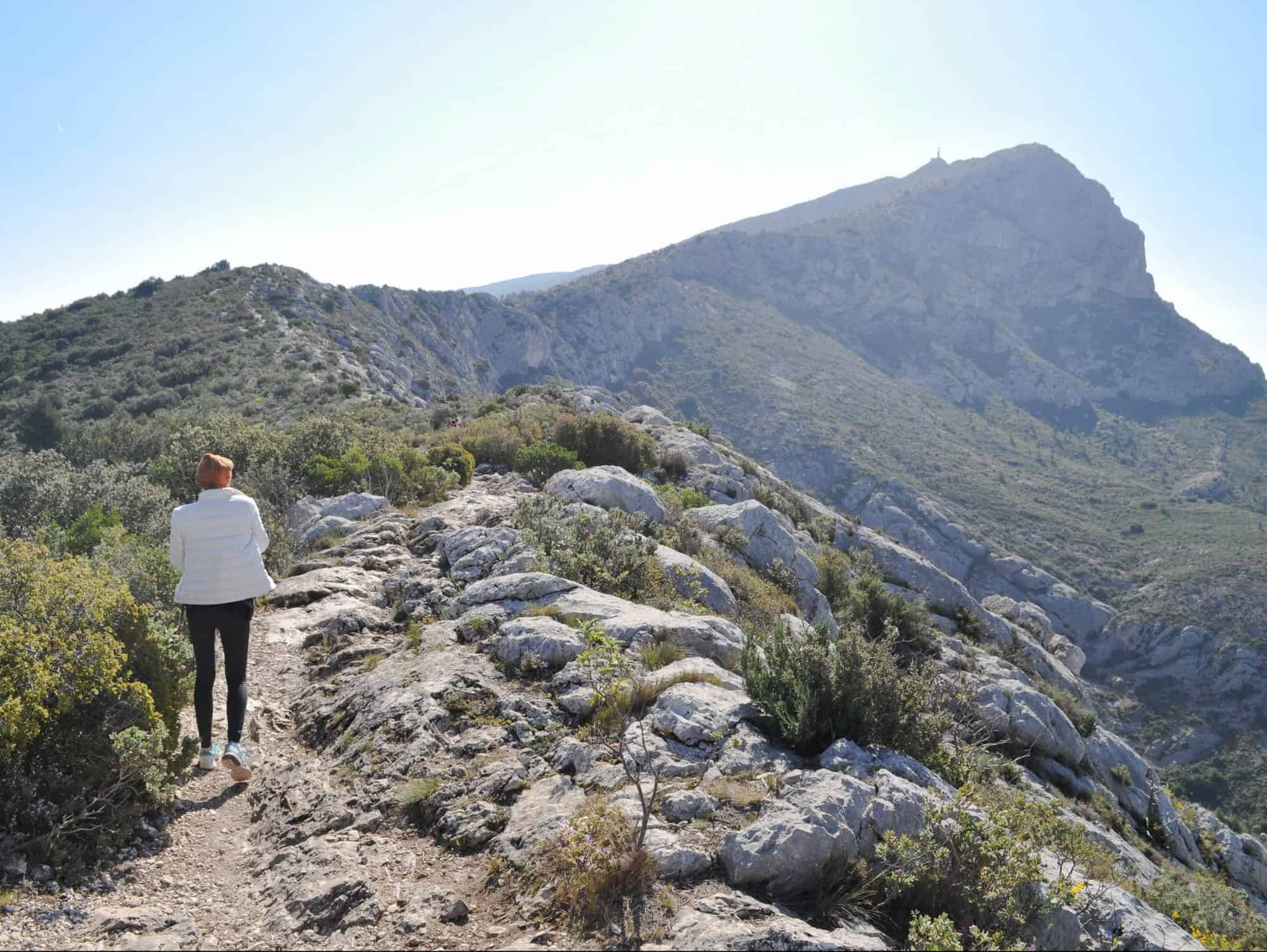 Montagne Sainte-Victoire is where Cézanne received inspiration for many of his landscapes and where Picasso is thought to have reached peak creativity. Though my artistic expression while hiking in Provence didn’t quite reach the level of these impressionist masters, it was an amazing journey across the mountain and an unforgettable view.

We hiked up the Blue trail, starting from bus stop J04 on the Bus Line L140, up to the Sainte-Victoire Priory and refuge. The trail is rocky and exposed, which made it a bit harder as it was incredibly windy the morning we hiked up. We headed down the other side of Sainte-Victoire mountain to Vauvenargues using the Red and White trail, which is clear and wide, but very steep. Each way took about two hours. We recommend starting from the dam and ending in Vauvenargues due to the steepness of the red and white trail (better down than up), and it’s more fun celebrating the end of your trek with some delicious food and a cold drink in the town with a view of the peak you just climbed.

Getting to Montagne Sainte-Victoire

We stayed in Aix-en-Provence, so to get to Montagne Sainte-Victoire we took Bus Line L140. We hopped on at the Arts et Metiers stop in Aix and bought the €1 bus ticket from the driver, which will get you to any stop on the line. We got off at the J04 stop. From there it was a short hike to the Barage De Bimont dam. Walking across the dam, you get a great view of the beautiful teal-colored lake. After crossing the Barage De Bimont dam, the Blue Trail begins on the left. It’s important to follow the painted markers as parts of the trail can be confusing with trails splitting into smaller trails. A marker with a straight line indicates you are going the right way. And an X, well, in this situation doesn’t quite mark the spot, but that you are heading in the wrong direction. 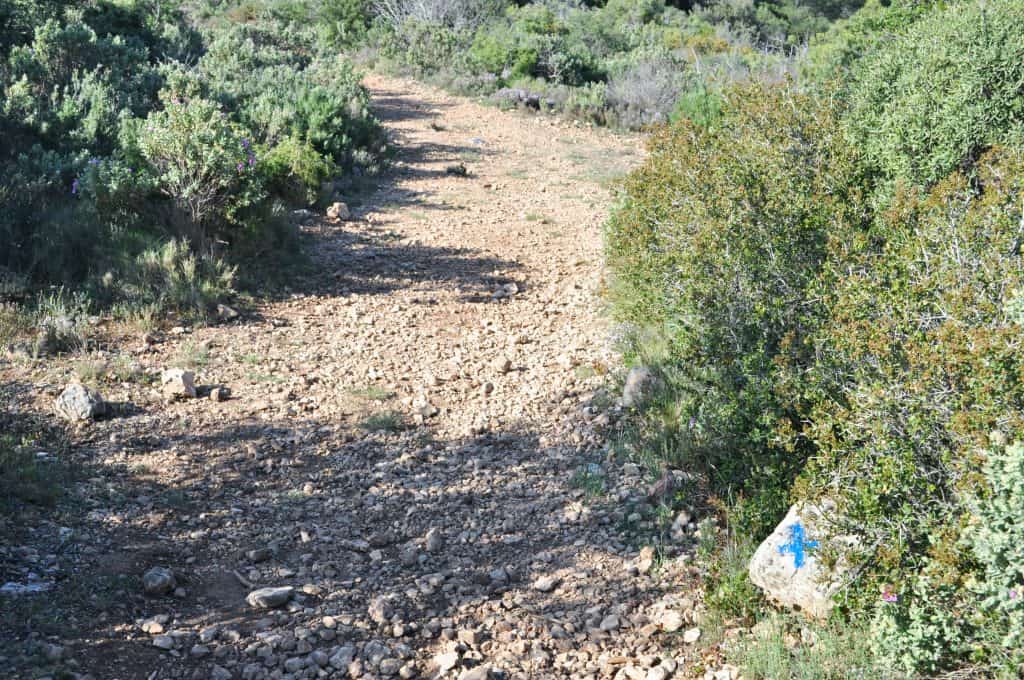 The view of the lake from the dam is picturesque but gets better as you climb. The trail quickly ascends making the way for fantastic views of the lake and the southern valley. First, you think you see most of the lake, but then as you go up and up, it gets bigger and bigger. The morning we trekked the mountain, it was extremely windy, and there is almost no shelter from the elements on the trail. Below is a map showing the blue trail that leads to the top of the mountain. 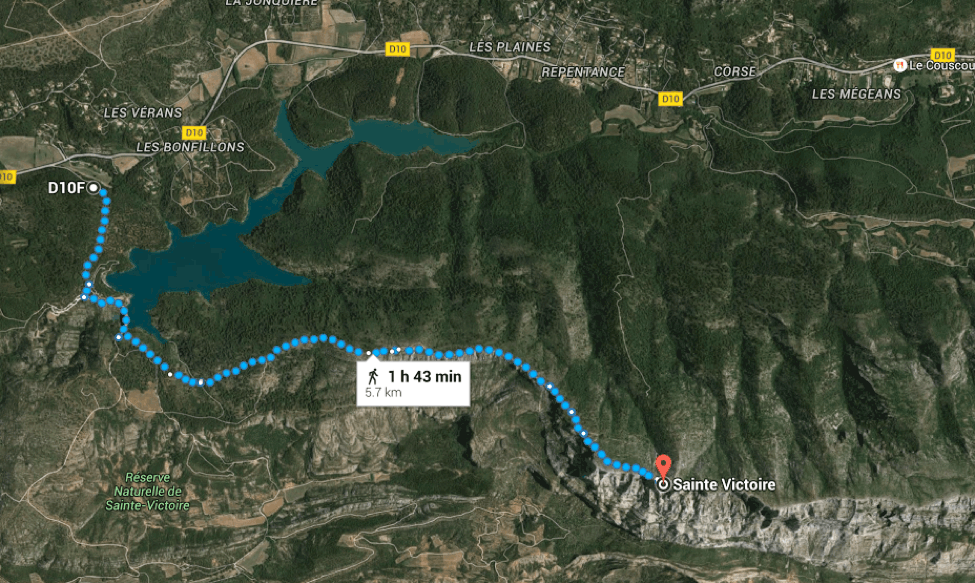 As we continued to hike, we could see the tallest peak far in the distance. Little did we know that we’d actually be reaching that peak before heading back down. When we finally got to the end of the Blue Trail, we went by the Sainte-Victoire Priory. This little refuge was built in the 17th century as a reminder of a 5th-century hermit who found safety in this spot. There’s often a fire where you can warm up on colder days, or take shelter from the wind! The Croix de Provence, or Cross of Provence, is another 15 minutes up the mountain. 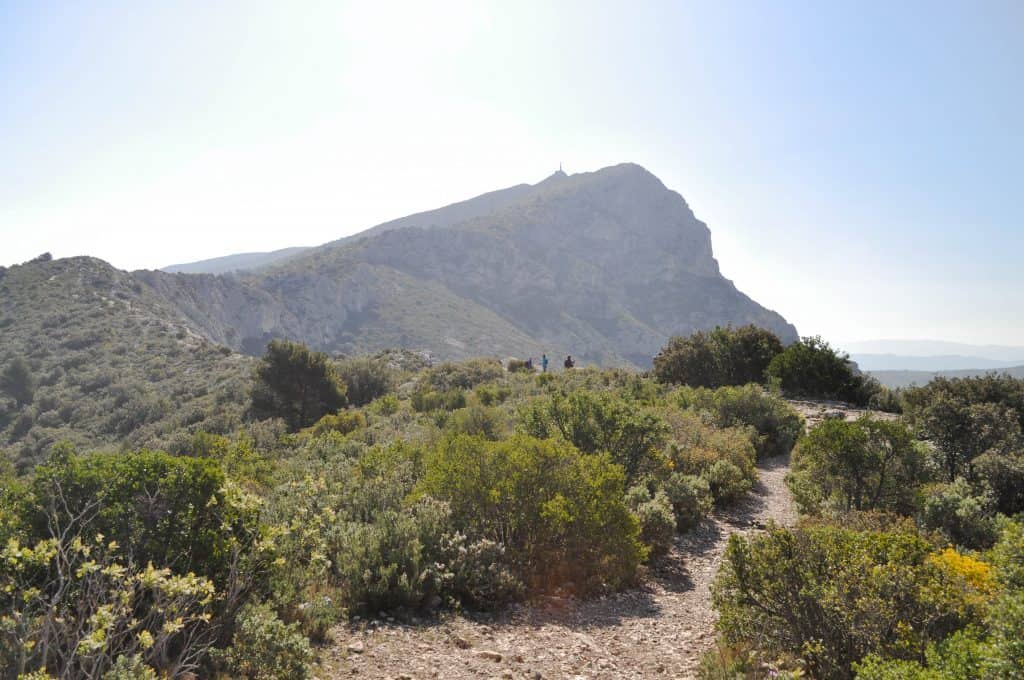 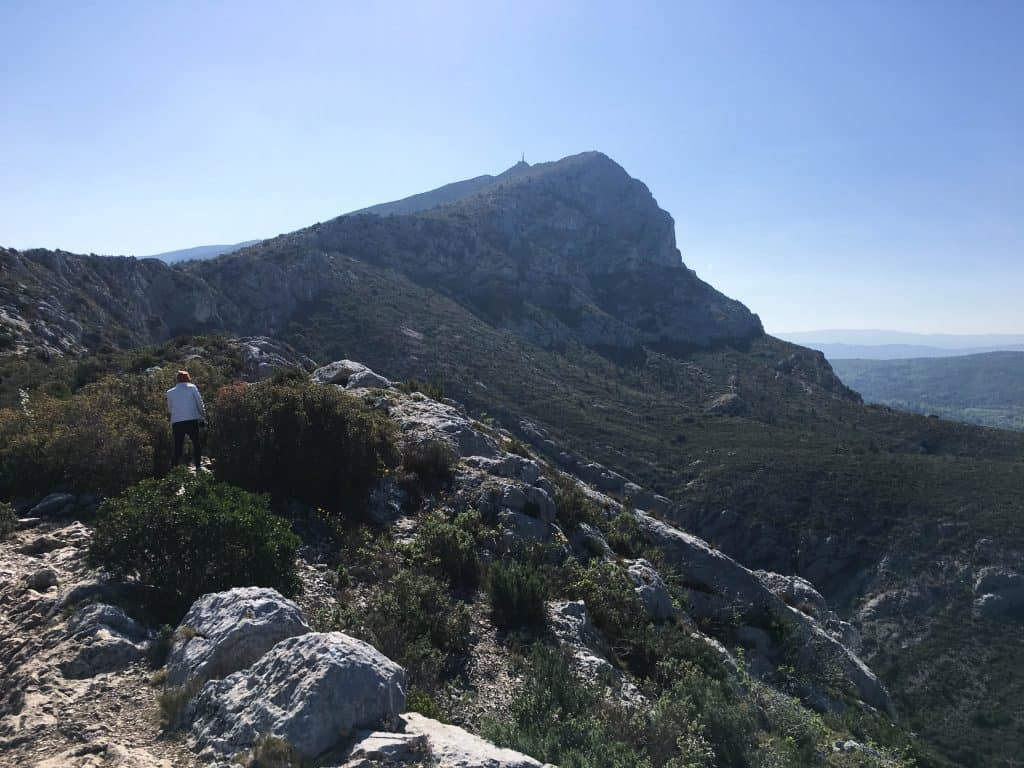 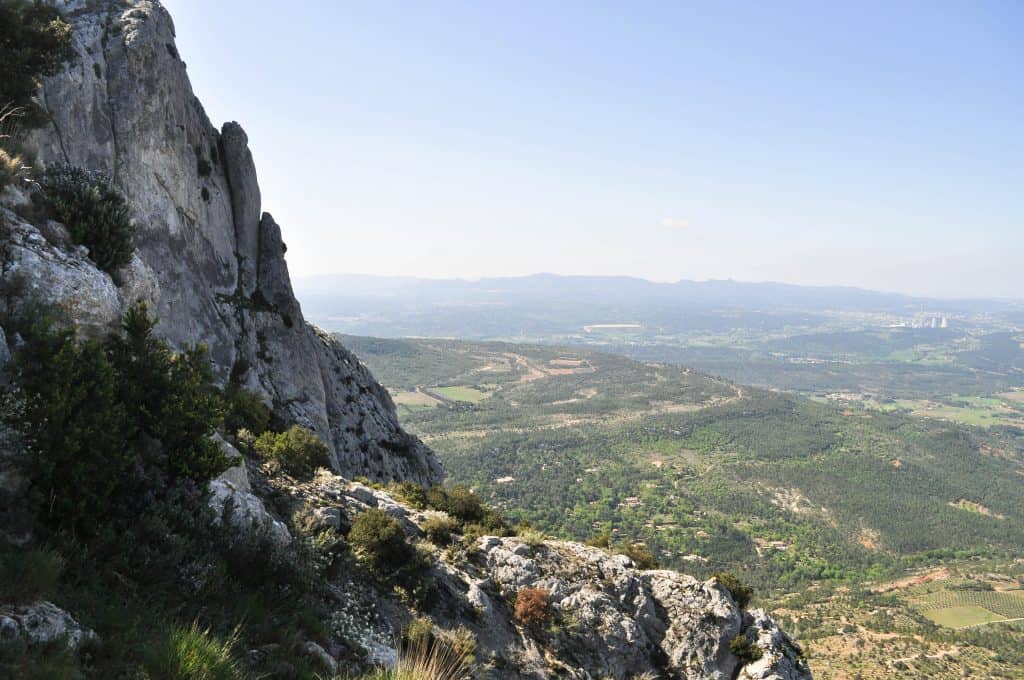 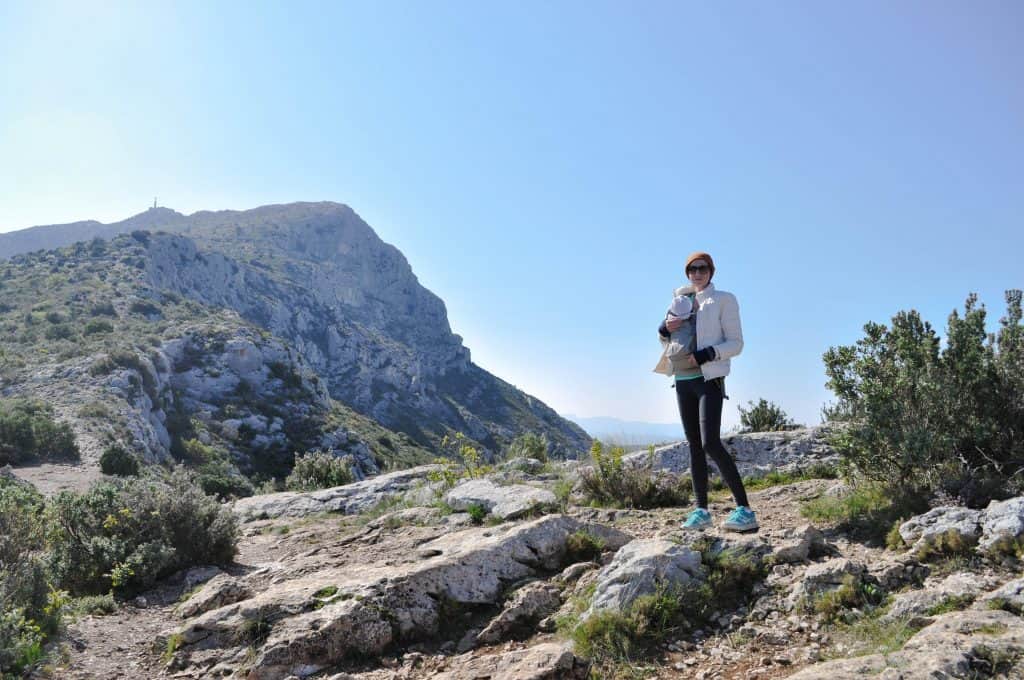 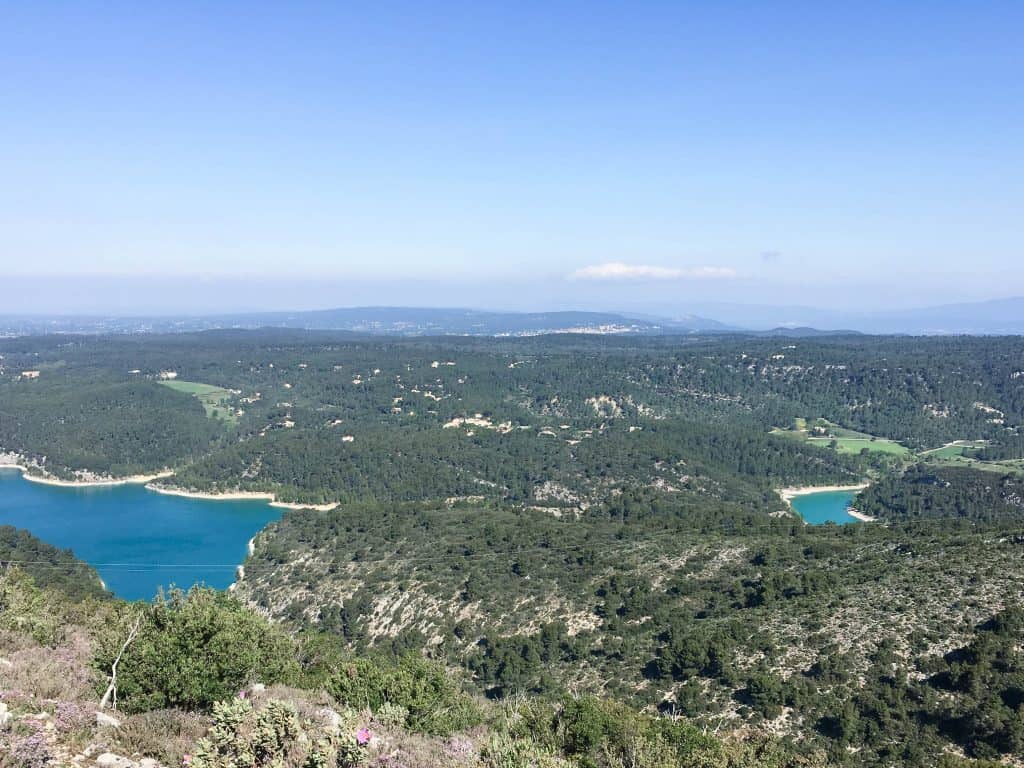 The Red and White Trail down to Vauvenargues

After taking in the views at the top of Montagne Sainte-Victoire, we took the red and white trail down to Vauvenargues. For the first 20 minutes or so, it was a rocky, narrow path with switchbacks similar to the Blue Trail. But soon we reached a spot where the path opens up wide enough for a car to drive through. It’s very steep (and hard on the knees!), and a bit slippery with small loose rocks. Below is a map from the top of Montagne Sainte-Victoire to Vauvenargues. We took the longer route that went along the D10 so we were able to watch bicyclists in a triathlon race down the hill. 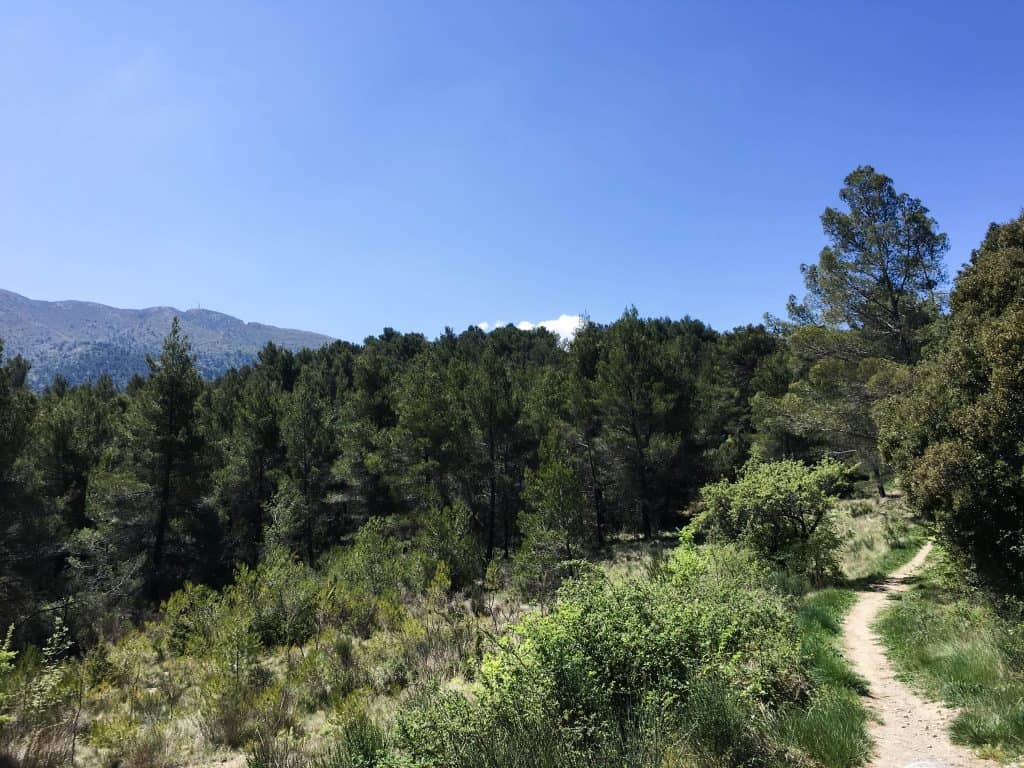 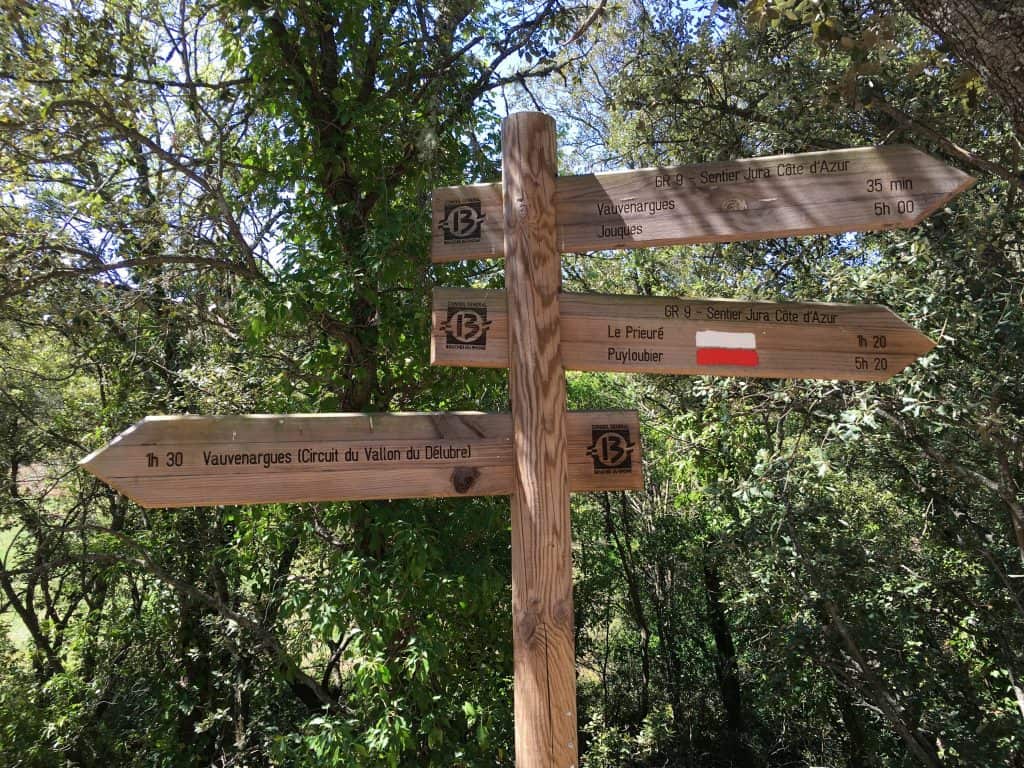 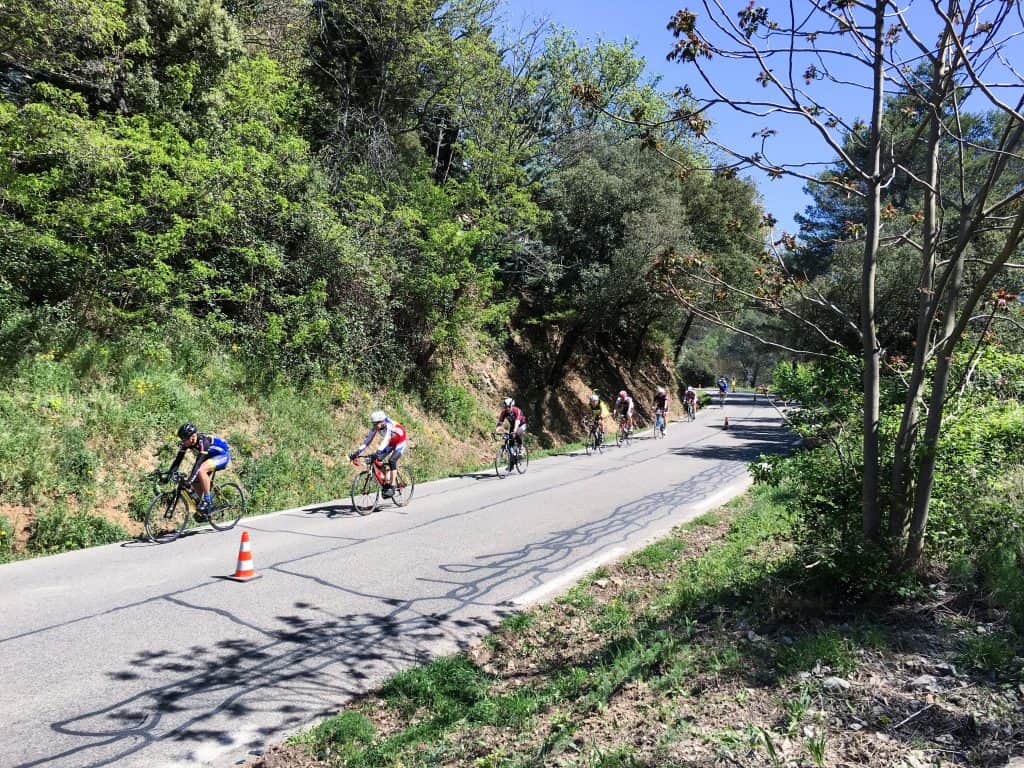 When we reached Vauvenargues, we looked back to share the same view of Sainte-Victoire as Paul Cézanne and Pablo Picasso. We marveled at the height of the massif we’d just crossed and appreciated its beauty. We finished our trek in the tiny town by grabbing a bite to eat and admiring Picasso’s Château de Vauvenargues from a distance before hopping back on the L140 bus to Aix-en-Provence. 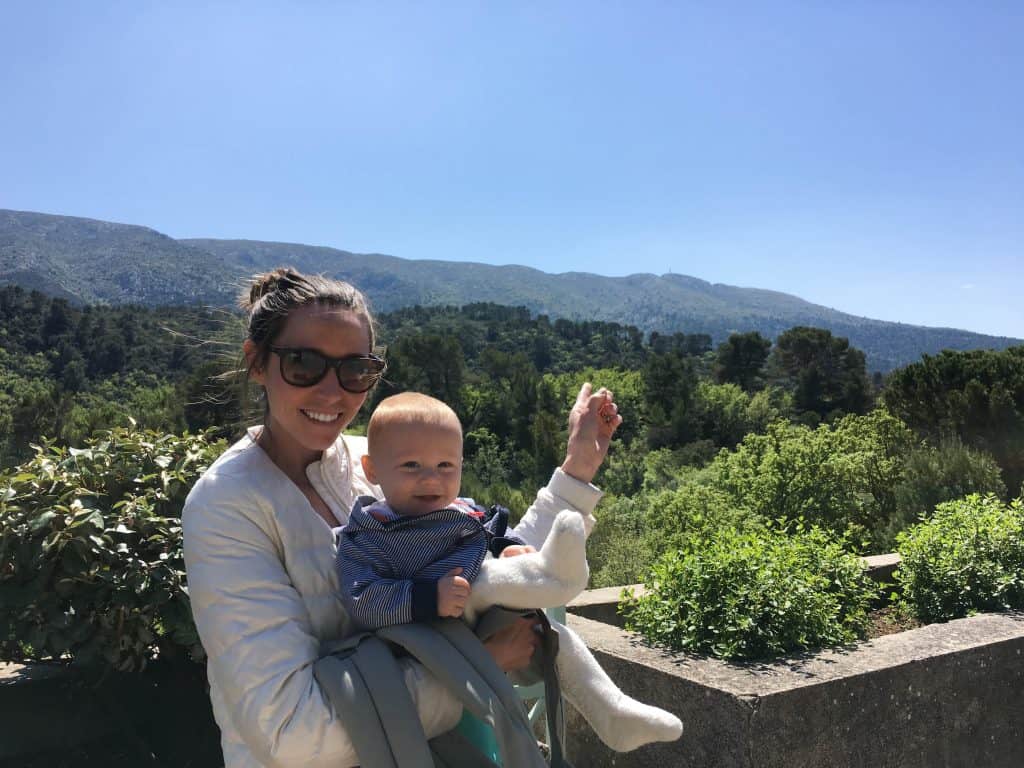 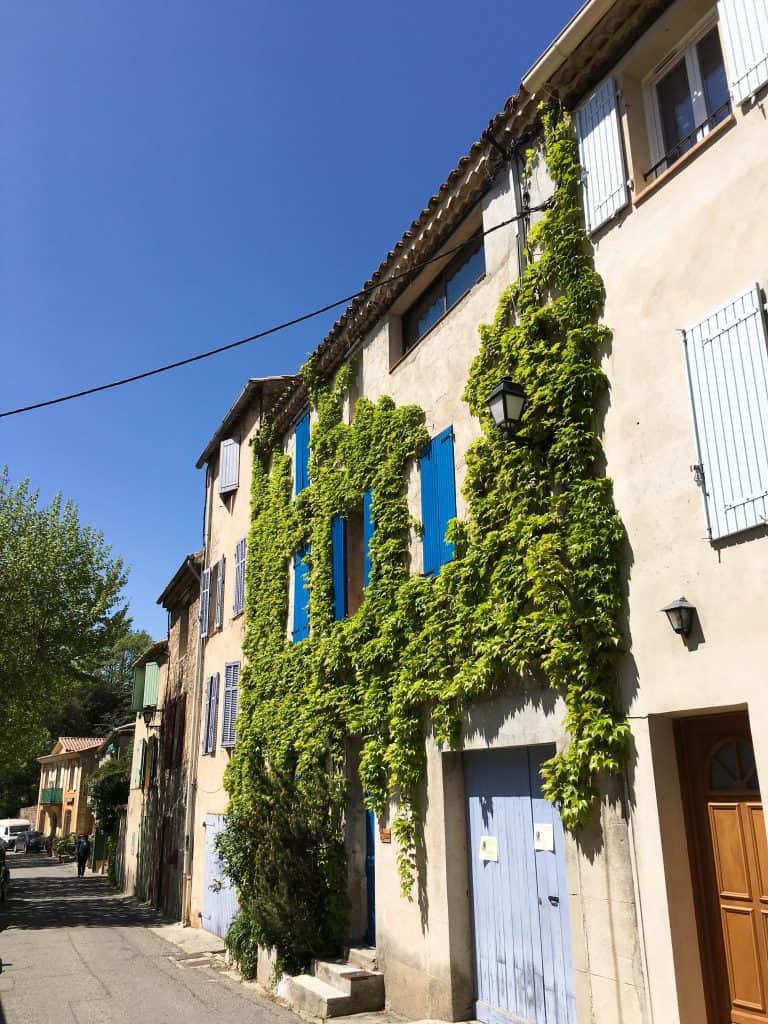 An Alternative trek on Montagne Sainte-Victoire

Another option for hiking on Montagne Sainte-Victoire would be to hike the southern part of the rim toward the town of Puyloubier. Use bus route L110. For more details about the trails and hiking in Sainte-Victoire mountain, we recommend getting a map from the tourist office in Aix-en-Provence.

Have a favorite hike in Provence, France? Let us know below!

A Weekend in Cassis, France: A quaint seaside town in Southern France

This site uses Akismet to reduce spam. Learn how your comment data is processed. 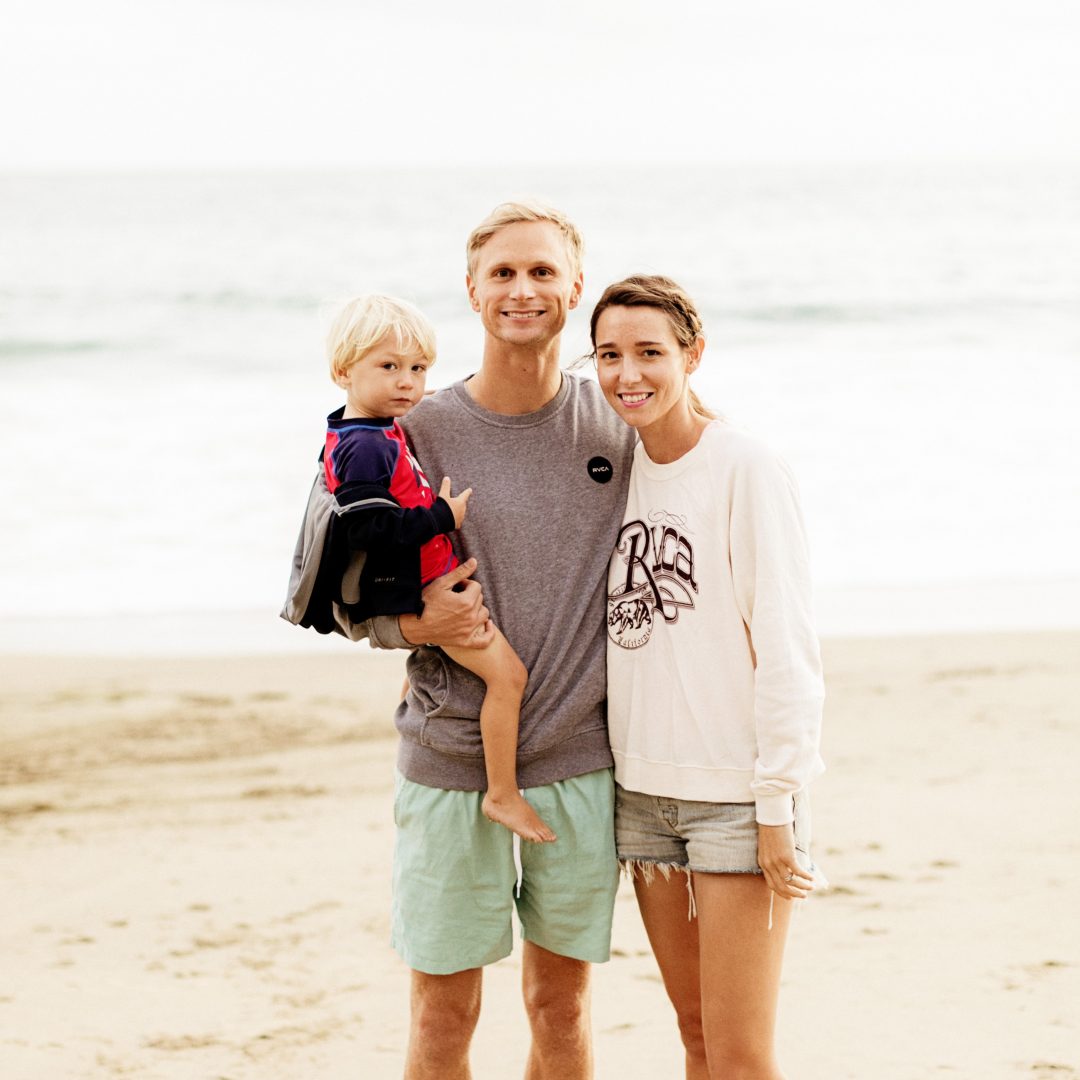 Hello, and thanks for stopping by. We're three adventurous travelers exploring the globe one trip at a time. We're sharing our best travel guides and tips here. Read More...

Morning walks in the woods, when that magical ligh

Some beach days need towels and umbrellas 🏖 and

The best way to have one of Maui’s most beautifu

Who's the lucky one in your family that all the m

Exploring indoors 🌱 The Conservatory of Flowe

#ad | When we decided to ditch plastic water bottl

National parks are insanely popular for a reason,